All articles tagged with "Slave"

Princess Kandy and mistress Jesika wanted to have fun at the expense of this guy who was an admirer. The mistresses invited him to their big house and they had fun showing him around. The naked mistresses had fun making him a human pony and he carried them all over the huge compound. He could feel their tits on his back and it was the fuel he needed to go on even though he felt like collapsing.

Mistress Anfisa wins bet and rides husband like a pony

Mistress Anfisa and her husband were playing a game and they had agreed that the winner would ride the loser like a human pony. None of them wanted to lose so the game went on for hours but finally she won. And she had a great time turning her husband into a human pony and riding him all over the house. He looked forward to winning the next round so that he could make her do the same.

Mistress Jenny wanted her boyfriend to work out and be stronger than he was. She was stronger than him and she did not feel secure when she was with him. She wanted him to go to the gym and work on his stamina but he refused. So she turned him into her human pony and she rode his back until he cried literal tears. And after that, he agreed to go to the gym.

Mistress Alice loves to use pain to get what she wants. This loser did not know that and he ended up messing with her. He immediately regretted it as she went ahead and she turned him into a pony. He was in pain as she rode him and she made him cry as her weight became too much for him. But she did not stop until he collapsed on the ground.

Princess Violetta and mistress Joschi found this guy repulsive but he thought he was God's gift to them. They hated his guts and wanted to tame his balls. So they invited him to their house where they turned him into a human pony and rode him naked all over the house. They did it while naked too so he was double dominated as he was turned on but could not get some and was physically dominated by having to carry them around. 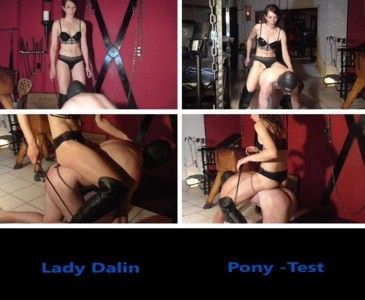 Mistress Alisha turns slave into human pony at his request

Mistress Alisha was shocked when her slave asked her to turn him into a human pony and ride him. He only had one condition that he should wear a bra and underwear while riding her and she agreed. The two of them had a great time as he felt her hot body on his back and she got to ride him all over the house. They agreed to do it again.

Mistress Gaia had a weak slave and she rode him like a human pony to make him strong. He was naked as she did this and it was even more painful. He did it for a couple of minutes and he collapsed in exhaustion. She did not let him off the hook. She whipped him so that he would carry her for a few more minutes and then repeated it daily to make him strong.

Mistress Gaia caught her slave wearing her clothes and she was pissed. She felt she had to teach him a lesson so that he did not wear her clothes ever again. He was allowed to wear whatever he wanted but it had to be his and not hers. She stripped him naked and then took him to her torture chambers where she rode him like her human pony. He felt pain and he was degraded but he learned his lesson.